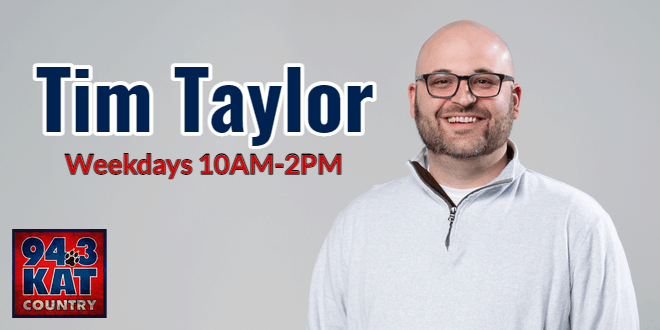 Tim Taylor hosts 10 a.m. to 2 p.m. on 94.3 KAT Country. Tim recently moved to Mid-Missouri from Illinois – where he grew up – with his fiancée and their dog Tiani. He started working in radio during his senior year of high school and has now been working in the business for 21 years. Most of that time has been spent in central Illinois, where he won three Illinois Broadcasters Awards for his on-air work and charitable efforts in the community. Tim also worked in northern Michigan for a year after graduating (barely) from Illinois State University.

In his spare time, Tim can be found watching baseball (go White Sox!), basketball, football, or hockey depending on the season. At least that’s what he would have you believe. In reality, he’s probably napping on the couch with the dog. Tim and his family are looking forward to exploring the many parks around Mid-Mo, as well as trying literally every restaurant as they are foodies. He also enjoys a good craft beer, grilling, and Marvel movies.

Tim is excited to learn all about life in Mid-Missouri, but he’s most excited about helping people get through their work day with a laugh and Mid-Missouri’s Country Favorites!