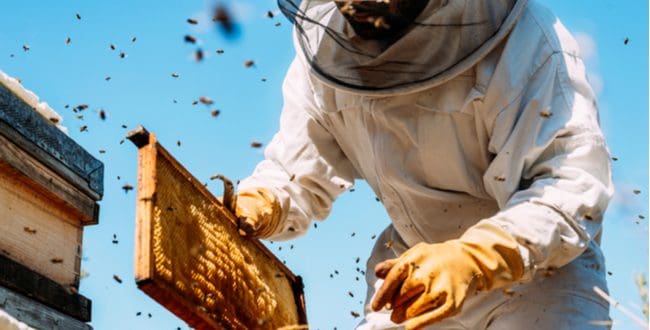 The Most Terrifying World Record Attempt Ever

When you think of world records is the first thing to pop into your mind something terrifying? No? For me, it’s all the books I read as a kid. At one point or another everyone has thought or maybe even attempted to break a world record to get into one of those shiny books. However, just how far would you go to do so?

Recently a man in China broke a record for being covered head to toe in BEES! While that alone is unsettling just wait it gets much worse! Covered in live bees would already be a challenge in itself but this man took it one step further. He covered himself in 140 pounds of living bees. Yes, the feeling of being crushed by bees which only weigh .00025 pounds!

To put this into perspective 4,000 bees together weigh only one pound… That’s a lot of bees! About 637,000 bee’s to be exact. Imagine the buzzing noise that is probably still resonating in that man’s ear right now! Truly a terrifying sight to behold and record to attempt to break. The only record I have ever tried to attempt myself is most pogo-stick hops in an hour. Needless to say, I didn’t end up in the books… but I gave it all I had!

What records have you tried to break? Any of them been as terrifying as covering yourself with over 140 pounds of bees?