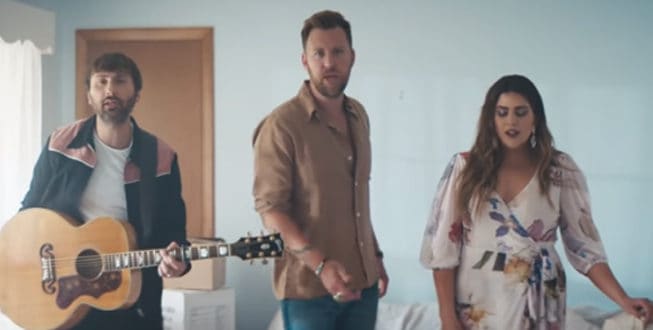 Lady A Get Star On Music City Walk Of Fame

Lady Antebellum was honored with a star on Nashville’s Music City Walk of Fame. The ceremony took place on Tuesday, October 22nd along with Clint Black, Chet Atkins, Mac McAnally and DeFord Bailey. Theirs is one of 89 stars recognizing artists for their “significant contributions to preserving the musical heritage of Nashville, as well as their creative endeavors.”

This is a really big deal for the group, particularly Lady A’s Hillary Scott, who is a Nashville native. Charles Kelley, Hillary and Dave Haywood explain it was a special moment, “Born and raised in Nashville . . . (Hillary) Born and raised here I’m like it honestly hasn’t quite sunk in . . .  sunken in?  It hadn’t quite sanked in.  I mean, we are in such great company that day with Mac McAnally and Clint Black and . . . (Dave) Chet Atkins. (Hillary) Chet Atkins. I mean . . . (Charles) Wow. (Hillary) So, it’ll be a really, really special day for family.  You know, I’ll definitely bring my littles out there to see that.  And then we’ll just have people stepping all over our name out there. (Charles) I love it! (Hillary) So, we’re excited. It’ll be awesome. (Dave) Walking all over us. (Charles) It’s really super cool. (Hillary) Walkin’ all over us, and we love it.  It’s the biggest honor in the whole wide world.”

Tim McGraw showed up to present Lady A with their honor.

Lady A will release their new album, Ocean, on November 15th. The project features their latest single, “What If I Never Get Over You,” which sits at Number 11 and climbing on the Mediabase chart.