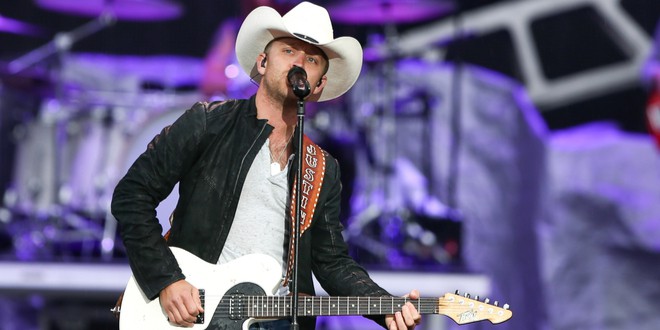 Justin Moore’s Kids Are Fans Of His Music

Lucky for Justin Moore, his kids are fans of his music. Justin says that his entire family listens to country music along with a few of what he calls “old school” rap songs thrown in for good measure, but they just don’t appreciate it.

Justin talks about about his kids loving his music, “Without a doubt I’m trying to push my music onto my kids.  But they really do like it. They always want me to turn it on country when we get in the car or truck or whatever, which is awesome. You know, it’s all that my wife and I listen to, outside of, we also do push some old school rap and stuff on em. Easy E, Snoop and those guys, just kind of out of the fun of it, and they go, ‘Aaarrrhhhh.’  You know, the music that we grew up … or that was out during our era, outside of country music, they just hate.”

Justin is in the Top 10 and climbing on the country charts with his latest single, “Why We Drink.”. The song is the second single from Justin’s latest album, Late Nights And Longnecks.

That album was released in 2019 and also includes his chart-topping hit “The Ones That Didn’t Make It Back Home.”