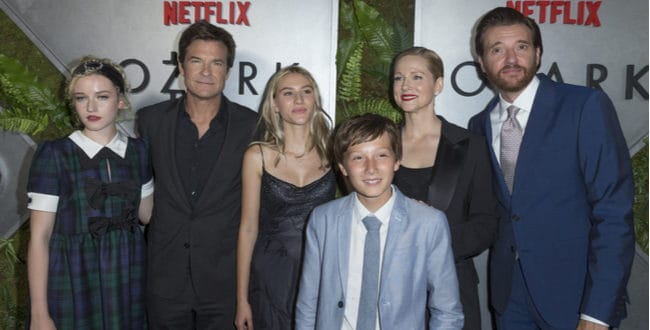 In honor of Season 3 of Ozark being available on Netflix, Jason Batemen is teaching us Ozark slang. It doesn’t matter if you’re a fan of Ozark or have never seen an episode, you’ll enjoy this video from Vanity Fair, in which star’s of Netflix’s Ozark, Jason Bateman, Laura Linney and Julia Garner teach us Ozark slang.

Since we live in Mid-Missouri and are in the Ozarks, you might even use some of these words, phrases and terms  once in awhile.

Here’s the official synopsis of season 3:

“It’s six months later, the casino is up and running, but Marty and Wendy are fighting for control of the family’s destiny. Marty preaches keeping the status quo. Aided by an alliance with Helen and drug cartel leader Omar Navarro, Wendy plots for expansion. But when Wendy’s brother Ben comes into town, everyone’s lives are thrown into chaos.”

“Ozark” is a dark drama series about a financial adviser from Chicago played by Bateman who picks up and moves his family from the Windy City to the Lake of the Ozarks in Missouri, where he has to launder millions of dollars to appease a drug boss.

While the Netflix series is based on the Lake of the Ozarks, most of the filming takes place in the Atlanta area due to tax breaks from the state of Georgia.