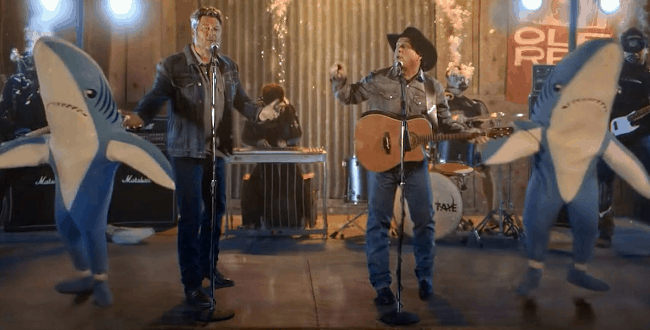 Garth Brooks Holds ‘Dive Bar’ Video Up Against His Classics

Garth Brooks premiered his first music video in 12 years on Friday, November 1st. The video accumulated over 26 million views on Facebook in just 72 hours. The video for his and Blake Shelton’s climbing single, “Dive Bar,” has the band taking a literal dive underwater.

Garth says he’s as proud of this video as any, “I think you’re gonna be able to compare it to “The Red Strokes,” “The Thunder Rolls,” “More Than a Memory” – all those ones that we’ve kind of — I hate to say this ‘cause it sounds egotistical. Forgive me if it does — Kinda we’ve become known for doing videos of this kind. ‘Cause we don’t do a lot! So, unless it’s something, pretty much, that brings another whole dimension to the song, we’re not gonna do it. This one . . . this one brought a third, fourth and fifth dimension to the song.”

Garth and Blake will perform “Dive Bar” live on the CMA Awards on November 13th on ABC. Garth is also nominated for CMA Entertainer of the Year.