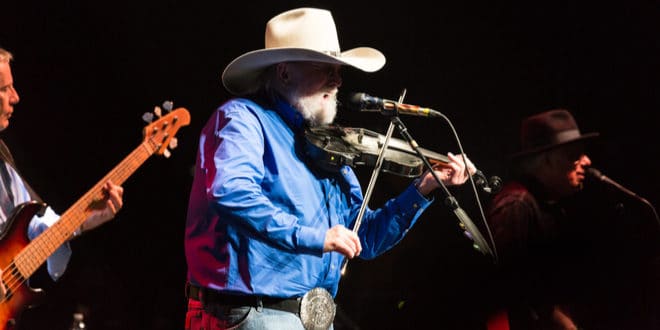 Country music legend, Charlie Daniels passed away Monday morning, July 6th. Daniels, who had a hit with “Devil Went Down to Georgia,” died at the age of 83 at Summit Medical Center in Hermitage, TN. A statement from his publicist said the Country Music Hall of Famer died due to a stroke.

A native of Wilmington, North Carolina, Charlie was a skilled multi-instrumentalist who landed his first big hit in 1974 with the timely “Uneasy Rider.”

The Grammy, CMA and Dove award winner, who was on the forefront of the Southern rock movement, went on to record several hits that were mainstays in country music, including “The South’s Gonna Do It” and “Long Haired Country Boy.” But “The Devil Went Down to Georgia” was his only number-one. In fact, he once speculated that he had sung the song at least 5000 times.

Best known for playing the fiddle, Charlie actually preferred playing guitar. In fact, during concerts he only occasionally played his fiddle. Of course, he was featured on fiddle when he appeared in the 1980 film Urban Cowboy, and although he had his own band, he would play fiddle on recordings for The Marshall Tucker Band.

A true road warrior, Charlie had only slowed down his touring, but continued to cross the country playing concerts and music festivals. He also annually headlined his own Volunteer Jam that began in 1974 in Nashville, taking a break from 1996 to 2014 when it returned due to popular demand.

In 2008, Charlie was inducted into the Grand Ole Opry by Marty Stuart and Connie Smith. In 2016, he became a member of the Country Music Hall of Fame.

Charlie was a loyal patriot and supporter of U.S. military efforts. He was outspoken about his political views, which were often reflected in songs like “In America,” as well as on his social media platforms.

He is survived by his wife Hazel and son Charlie Daniels Junior.  Funeral arrangements are pending.