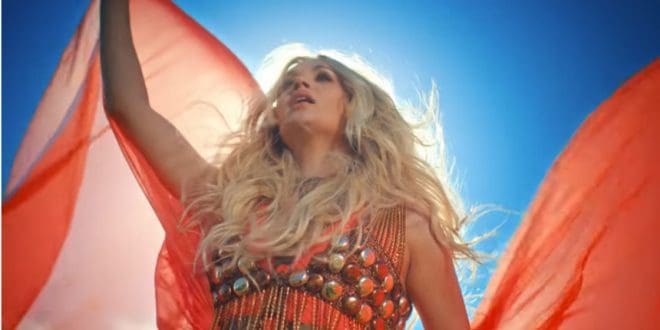 Carrie Underwood was surrounded by Family, Friends & 1 Special mentor when she received her Star on the Hollywood Walk of Fame.

An emotional Carrie Underwood received her star on the Hollywood Walk of Fame in Los Angeles yesterday (Thursday, September 20th). She was joined by her family, including her parents, her husband, Mike Fisher, and their son, three-year-old Isaiah. Former American Idol judge Simon Cowell spoke first, telling the gathered crowd abut the first time he encountered the now superstar during American Idol auditions in St. Louis in 2004. He said, “This shy lady walks in and sings ‘I Can’t Make You Love Me’ and the show turned into full color. That was the effect Carrie had on me and the producers and we thought we may have found a great artist here . . . After you sang ‘Alone’ I made the prediction that you would become the best-selling Idol winner, which you are. But I could have never anticipated how successful you’ve become . . . I love you and you are a total, total star.”

Brad Paisley stepped up to the podium to say, “Carrie Underwood, is in many ways, this generation’s Dolly Parton as Ms. Country Music. I don’t think we could ask for a better ambassador. I don’t think there’s anything she can’t do. This is the best of country music in concrete. I can’t wait to see everything you do from here. I think of the artists that’ll be in here at Capitol Records that are going to walk out here one night drunk and throw up on the star of one of the most important artists we will ever have in our format.”

Carrie wiped away tears as she thanked her family and her manager for their belief in her. She said, “How is this my life? How does a girl from Checotah, Oklahoma, get a star on the Walk of Fame? I will tell you: belief. So many people who have believed in me . . .”